Amid trauma of missing and murdered Indigenous women, stories of resilience stand out, says chief commissioner

Amid trauma of missing and murdered Indigenous women, stories of resilience stand out, says chief commissioner

‘It’s been a real labour of love, and it’s been a real honour to be able to do this work,’ says national inquiry chief commissioner Marion Buller, pictured on Dec. 13. ‘I’m so genuinely in awe of them [the families and survivors]; their strength, their courage, and their resilience, the will to come back.’ The Hill Times photograph by Andrew Meade​

Since its first hearings in May 2017, the National Inquiry into Missing and Murdered Indigenous Women has heard from almost 1,500 families and survivors, and through it all chief commissioner Marion Buller says she’s been struck by the many stories of resilience.

“The ones that have resonated with me the most, and that will stay with me even after this work is done, is the stories of women who have come back from tremendous loss—be it a loss of a mother or a sister—who have really had struggles in their lives and just found this amazing resilience to come back and deal with their grief, deal with healing, and then move on,” Ms. Buller told The Hill Times in an interview in Ottawa last week.

“To going back to school, to confronting abusers and reporting them to police, to taking courses so that they can help other people in their communities with the same problems. I don’t want to say one is more important than the other, but the stories of resilience have been very uplifting and very inspiring,” she said.

Officially launched in September 2016, the National Inquiry into Missing and Murdered Indigenous Women and Girls held its final hearings at the Westin Hotel in Ottawa last week from Dec. 10-14, with closing submissions from parties with standing heard.

Indigenous organizations, leaders, and others have long called for a national inquiry to understand the scope, causes, and impacts of missing and murdered Indigenous women in Canada.

The RCMP’s official count from 2014 indicates that 1,181 Indigenous women and girls went missing or were murdered in Canada between 1980 and 2012. Another 32 deaths and 11 disappearances were added in a 2015 update, bringing the total number to 1,224.

But the actual figure is widely believed to be higher; uncaptured in part due to poor records, with people misclassified as non-Indigenous, or disappearances or deaths assumed accidental by police, among other things.

Originally given a $53.8-million budget and two years to examine the systemic caucus of violence against Indigenous women and related institutional policies and practices, last March, the independent inquiry requested a two-year extension and an extra $50-million to complete its mandate. Instead, in June, the federal government granted the inquiry an extra six months to complete its work, with the final report now due April 30, 2019. It has until June 30, 2019 to fully complete its work and wind down operations. An interim report was released in November 2017.

In response to questions from The Hill Times last week, Crown-Indigenous Relations Minister Carolyn Bennett’s (Toronto-St. Paul’s, Ont.) office said it’s looking forward to the inquiry’s final report: “We will get families the answers they have been waiting for.”

Asked about the decision to only grant a six-month extension, Ms. Bennett’s office said it’s “confident” the inquiry can deliver on its mandate under the time frame given.

But Ms. Buller said she remains “very disappointed” the federal government did not grant the inquiry the requested two-year extension.

Nonetheless, Ms. Buller said she thinks the inquiry has “achieved more than what we set out to do,” having added on extra expert and institutional hearings, among other things, and she’s “very proud” of the work of the entire national inquiry team, which has “worked 24/7.”

Five commissioners were originally appointed to run the inquiry, led by Ms. Buller, a former provincial court judge in B.C. and a member of the Mistawasis First Nation. Métis University of Saskatchewan professor Marilyn Poitras resigned as a commissioner in July 2017, citing concerns over the “colonial style” and structure the inquiry was taking. The other three remaining commissioners are: Michèle Audette, former president of the Quebec Native Women’s Association; lawyer Brian Eyolfson, a member of the Couchiching First Nation; and Inuit lawyer Qajaq Robinson.

The inquiry’s first truth-gathering hearing with families of victims took place in Whitehorse, Yukon on May 31 and June 1. In all, 15 such community hearings were held, on top of three statement gathering events and nine knowledge-keeper, expert, and institutional hearings. Along with 1,484 families and survivors, the inquiry heard from 100 parties with standing—a list that includes associations, institutes, grand councils, provincial governments, the federal government, and more—and 101 experts, and received 604 artistic expressions. 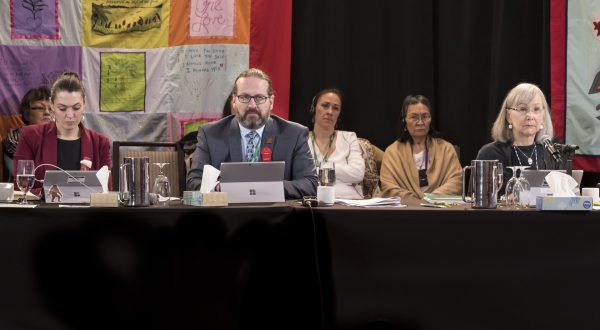 Much of the testimony was gathered as part of open sessions like those held in Ottawa last week, with audio and video recorded for each speaker, and all evidence, including any items or videos brought to show the commission, diligently logged. Members of the public have been able to attend these hearings, with support staff and plenty of tissue boxes on hand. At the hearings last week, brown paper bags were spotted throughout the room, marked by black sharpie reading, “tear bag” (in French and English).

The testimony from families and survivors has often been wrenching—stories of abuse, of families ripped apart, of mistreatment at the hands of the very authorities meant to protect them.

Ms. Buller said the 22 years she spent as a judge helped prepare her “to deal with a lot of challenges feelings under a lot of pressure.”

“That was good experience and good training for me personally to know when to stop and leave work mentally, physically, and spiritually and take a break,” she said.

Hanging on the walls behind the commissioners, and on the ground between them and a podium for speakers, are blankets made by Indigenous women, girls, and community centres across Canada—an item that’s “culturally meaningful regardless of whether you’re Métis, Inuit, First Nations from the West Coast, Indigenous from elsewhere in Canada,” said Ms. Buller. Other items of significance gifted to the inquiry were also displayed, including a red willow basket, eagle feathers, baby booties, and Inuit stone carvings.

“It’s important for people when they’re telling their truths to us to see something that’s familiar to them, it just makes the process a little easier,” explained Ms. Buller.

On top of these public forums, families and survivors had the option to instead share their truths in private, one-on-one sessions with the inquiry. All of the carefully logged records—from written and oral testimony to artistic expressions (including from any one-on-one sessions the inquiry has gotten permission to share)—will be organized, compiled, and handed over to Library and Archives Canada by June 2019 to form an accessible, “living” archive of the inquiry’s work, said Ms. Buller.

As a First Nations woman and a former judge, Ms. Buller said she already had a “pretty good idea of the degree of the problem” of missing and murdered Indigenous women in B.C., but the inquiry has been a “huge learning experience” in terms of the “extent of the loss” experienced across Canada.

“When we’ve been hearing from families and survivors, it isn’t just about one lost auntie or grandma or mum, it’s, ‘We lost our mum and we also lost our auntie and two cousins.’ So the impact of multiple losses in one family has been something I wasn’t quite anticipating,” she said.

With closing submissions now complete, the four remaining commissioners—with the help of researchers and lawyers—will spend the next roughly four months sorting through all the evidence, testimony, and research gathered to draft a final report. The aim is to organize the report and final recommendations by identified themes, she said.

“There were of course regional differences about what some of the issues are top of mind, and we will address those regional differences in our recommendations, but there are [also] some common themes about problems with child welfare, difficulties with the police, also housing and poverty issues,” said Ms. Buller.

The commissioners will meet “regularly” in different locations across Canada to do this work, with different inquiry staff in the room based on need, she said.

“We have a huge responsibility to do this right, and we’re committed to doing it right. So it’s going to be a lot of work, a lot of reading, a lot of writing,” said Ms. Buller.

Before the inquiry, Ms. Buller said she’d only met one of her fellow commissioners, Ms. Audette, briefly at a 2012 event to mark her receipt of a Queen’s Diamond Jubilee Medal. The others she met for the first time at the August 2016 announcement of the inquiry’s launch, but the working dynamic that’s developed between them is “fantastic,” she said: “We have a really tight, respectful team.”

Ms. Buller said her journey as chief commissioner has been “full of rewards,” and “full of challenges.” On the latter, she highlighted the unprecedented scope of the national inquiry’s work, and the challenge of travelling and “negotiating the geography” of a country as big as Canada.

Since it launched, the national inquiry has been beset by criticisms, including that it was slow to get going, took too colonial of an approach, and did a poor job of communicating with families who faced too many barriers to participate, among other things. Along with one commissioner, a long list of inquiry staff have resigned, citing concerns over process.

But Ms. Buller said she’s “extremely proud of the work” the inquiry has done.

“This type of national inquiry has never been done before; we have had to build it from nothing, from a piece of paper basically,” she said.

“I’m so genuinely in awe of them [the families and survivors]; their strength, their courage, and their resilience, the will to come back,” she said, recalling something commissioners were told during hearings in Saskatoon, that, “it used to be that people said, ‘well you Indians, you don’t even have a prayer. Little did they know how strong our prayers really are.’”

Due by the end of April, the national inquiry’s final report will come out six months before the next federal election, set for October 21, 2019. What impact this timing will have on the government’s response to its findings remains to be seen.

Asked to weigh in, Ms. Buller said once the inquiry hands over the final report “it’s up to the politicians to take it from there.”

“I think the overwhelmingly strong grassroots support that we’re receiving all across Canada is going to move this report forward, election or not, and I’ll leave it to them to decide how they’re going to press the politicians,” she said.